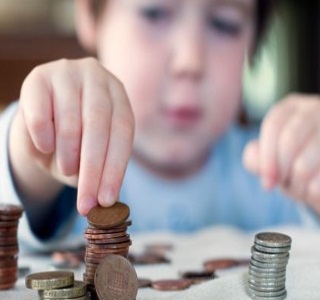 I got up from my desk and asked Tanav, my 6 year old son, “C’mon buddy, let’s play something?“

It was the kind of asking parents do after a sudden sense of guilt of not spending enough time with their kids.

Children are so forgiving. An adult version would have replied, “No thank you! If you don’t have any time for me, then don’t expect me to have time for you!”

But Tanav loved the idea, “Shall we play Monopoly?“.

“Really? You don’t know how to play Monopoly?“, He asked.

“No, I don’t. Will you teach me?” I felt ashamed and happy at the same time. Ashamed of not knowing the game and happy to see Tanav’s face lit up perhaps at the thought of teaching his Dad.

NO PAIN NO GAIN

This version of Monopoly was based on Children’s Entertainment Park.

“The person who loses all his money first loses.” He said seriously.

“Yes!“, He replied sounding like he was sharing a trade secret.

We started playing the game.

I noticed he was not buying anything. When I asked, he said, “Remember, the person who loses all his money first loses?”

“Yeah, but if you don’t buy anything, you won’t be able to grow your money and what you have will run out with time.“, I said.

I, on the other hand, went on a buying spree – I bought a Roller Coaster, a Mini Golf course and a Merry Go Round.

I felt I was building an empire like MJ’s Neverland. Our light bulbs flickered a bit confirming that Michael Jackson felt uncomfortable in his grave.

The tables turned soon enough for Tanav though. He was spending money every time he landed on my properties – which were too many for his liking.

This was perhaps the rare occasion when he wasn’t happy with his otherwise favorite rides.

He realized his folly and changed his strategy.  Soon, he too possessed a Helicopter Ride and Loop-the-Loop.

He jumped with excitement each time I had to pay him to take his rides.

Being a parent is a blessing. We never have to worry about losing. We win either way. I let Tanav win.

Tanav might have learnt something from me, but for me it was as if this woke me from deep sleep.

I had been very busy being busy. I was not doing what I had been preaching Tanav.

I had not taken any action although I had been thinking about investing for children’s future since long. If thinking alone could take one forward, I would be among the front runners!

Money my wife and I had kept aside was deteriorating in value without being invested. I had been acting a bit like Tanav holding on to his money.

Tanav is still learning but what excuse do I have?

“The best time to plant a tree was twenty years ago. But the second best time is NOW!”

The moment one begins, a guiding force from above comes to help. That happened with me the very next day at work.

A colleague suggested an investment plan which he had chosen for his children.

I searched on Google and several options popped up in front of me.

I got a call from a financial adviser the same evening.

The information overload can lead one into further procrastination though.

“Procrastination is my sin, it brings me naught but sorrow;

I know that I should stop it, in fact I will, … but tomorrow!”

For every plan you select, a seemingly better one is available. The point is that ‘either one of those plans’ is better than ‘not investing at all’.

I am glad I finally made two investment decisions for my children’s and our own future.

Pheww! I just saved myself. Tanav and Sohana, my two year old daughter, would be grown up soon. They would have asked me why didn’t I invest knowing so well that, “..if you don’t buy anything, you won’t be able to grow your money and what you have will run out with time.”

I hope you too have saved yourself from this embarrassment?

If you like this post, then show the love by sharing the investment decisions you have made that let you sleep peacefully at night.

One thought on “What A Game Of Monopoly Taught Me!”